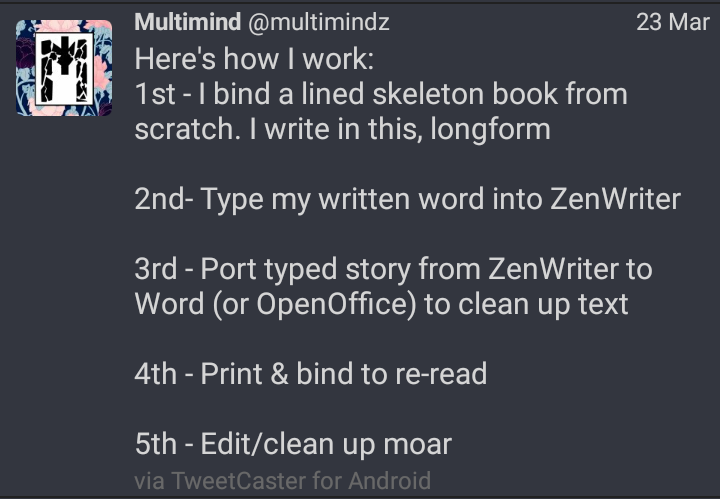 Ok, I said I was gonna write about how I make my works. I did it a bit on my Twitter:

Here’s how I do it, broken down:

0. Consult and work on section in Masterbook

I build the story and all the elements that need to happen in it in the Masterbook. The section in the Masterbook is sometimes more detailed than the story. This is good if I ever want to add more stuff to the story later and flesh it way out. This keeps track of the plot, the hidden bits, why characters act the way they do, dynamics, etc.

1. I bind a lined skeleton book from scratch. I write in this, long-form

This is pretty self explanatory. I make a skeleton journal by hand. A skeleton journal is exactly that: it’s chipboard, some string and paper. It is the bare bones of what a journal is supposed to be. I generally don’t do fancy stitches but sometimes I give it a whirl.

It’s good binding practice. If I screw up, I don’t care. If I don’t, huzzah?

A skeleton journal is stripped of all anything that could be potentially distracting to me. I don’t need to make a fancy cover, I just need to post the name of the work and I’m done

It takes me less than an hour and a half to make a skeleton journal. I decide how many signatures (packs o’ folded paper) will be in the journal and then go for it. For a novella, I may use three, for a novelette, I may use two. For a novel, 4-6 signatures. If I write too much, I make another skeleton journal, which I did for Butterfly. If I write too little and there is a signature left, I take out that signature so one isn’t wasted. Or, as was in the case in Butterfly, Con’t, I just flipped the book around and wrote a super short story, “Watershed” since I knew I had enough space and I didn’t feel like making a journal for such a short story. It worked out but it’s rare I do this.

When I am writing, I rarely – if ever – leave my home. Like, I am planted in front of my journal with my squishy pen for 12-16 hours a day. I rarely take breaks, just for bathroom and naps. No social media, no nothing. I even adopt what I call “The Writer’s Diet” just to sustain myself and stay focused on the story. It’s pitas, hummus and water. ‘Das it. It is not a healthy, long-term diet. It’s a “don’t die because I didn’t eat for three weeks to avoid distraction” diet. I gorge when I am done. F’real. Sushi burritos, pizzas with pepperoni and mushrooms, murder burgers, the works. Don’t emulate this diet, it isn’t healthy.

I listen to music as I write. It helps by a lot. I tend to stick to one artist but sometimes I skip around. I stay strongly in the Alt Rock realm so Sick Puppies, Coheed and Cambria, Serj Tankian’s scores (they’re nifteh), etc, etc. I know a lot of folks in the Rock part of the music industry and/or have a lot of music that really influences me so there are bands I actively avoid so I don’t get stuck on Memory Lane: P.O.D., My Chemical Romance, Straight Line Stitch, System of a Down, Linkin Park, Blindside, Avenged Sevenfold (I tried with A7X for Kinetics, it added several hours to my writing time because I had to sing to a whole album. All of it.).

Also, I tend to have my 3D printer running. It keeps my apartment from being too quiet and my mind getting wound up as a result between songs or albums. So that means multi-day prints. 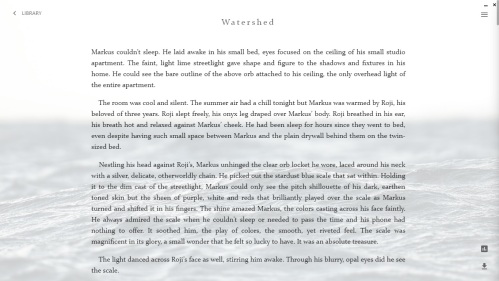 Once I’m done – I wrote “Fin”, I numbered the pages, I put the completion date down – I take a break. Sometimes it’s a couple weeks, sometimes a couple days. My wrist needs to return from the afterlife, my frontal lobe needs to stop feeling like its on fire. When I do sit back down, it’s just like when I was writing long-form – I stay for hours and days. I pull up Zen Writer, who I have been using since 2013. I really love the serene, distraction free essence of the computer application. No squiggle lines, no harsh light, just calming ambiance. This is the second draft and this draft, I start to note any issues or see any liner notes I need to acknowledge. It’s good to forget the story a little on this draft because if it doesn’t make sense to me after I forgot the story, it won’t make sense to the reader.

3. Port typed story from ZenWriter to Word (or Open Office) to clean up text

Time to see how many times Word will think “Savalez” is an improper word! Maybe I have at least three different spellings for “pilot”. This stage is pretty much the 3rd draft – I pick through word errors, tell Word that, yes, other names that aren’t Eurocentric are real, figure out how the story reads and mess with the formatting so it plays well on the page. I’m not looking at the story while being influenced by a fancy background, sounds and suches. It’s cold black and white. I tend to put the text in Perpetua, it just feels official to me.

4 & 5 are kinda not done anymore. They pretty much get replaced with putting the works in manuscript format. This means I have to go through the work again and again so I can find whatever I didn’t find the first several times. And the kicker? I’ll still find errors. Even when I think that all the errors have been eradicated. I need to get a proper e-reader so that I can do whatever mark-up I need to do. I hope one day to procure the Remarkable. I hope that will cut down the edit time I do. I want to stitch the books into physical books but I wanna be super, ultra certain that they are trilly and truly done.