I made a “content warning” mock up a long while ago (sticky note) and just recently, I put it into an actual work. 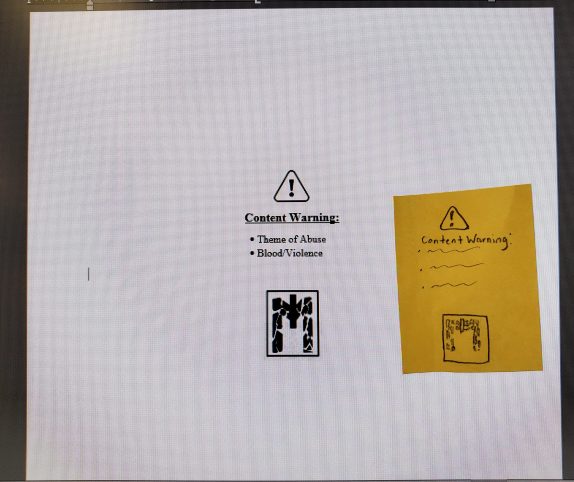 This is in the Beta Reader copies of novella Kinetics. I slapped that in there because, well, the story gets really, really dark. If it were a small smack of both contents, I wouldn’t add it but since it is throughout the book, I wanted to add it. I’m not interested in losing beta readers simply because I wanted to be a douche. This doesn’t tell the plot, the twists, what’s going to happen in the book, nothing. Just stuff to be wary of. Actually, I tell my beta readers if a book is filled with sordid content so they can chose whether or not to pass. I see “Content Warnings” as no different as what they use on movies. And sometimes, that stuff is super useful, they are there for a reason, ignore at your own peril – such as when not-too-bright parents took their children to see Deadpool (an R-Rated movie) and The Watchmen (another R-Rated) movie. Why? Because they ignored the content warnings and became upset the movies were at least 60% murder, 25% sex and the remainder was whatever writers could get away with that wouldn’t count as NC-17. These content warnings are useful.

“Oh, people shouldn’t be so sensitive,” is usually said by people who really don’t get it. But also tend to be the same people who clutch their pearls when someone throws a Christianity-Sucks/Prejudice-Sucks joke out there. Here’s the thing: it’s okay if someone is bothered by blood or abuse. Actually, of all the folks I interacted with who said “yeah, I don’t want to read in-depth abuse stuff”, a strong majority had personal experience being on the business end of such behavior. There’s a time and a place to stand on a table and scream “For ARRRRRRRRRRRRRRRT. I am an ARTISTE!” and a time and a place to go, “Ah, buckets o’ blood is not your thing, cool. Good to know.”

It doesn’t make people “soft” for having boundaries of what they can and can’t stand. For example, I have a trauma disorder (technically two but that’s a different thing), thus I am well served by content warnings and such. However, I wouldn’t be surprised if I have morbid interests because of the disorder. I can stomach staring at pictures, footage and extremely graphic re-enactments of mass shootings. It’s what my brain is used to so, hey, it’s whatever. The average person doesn’t hop on the internet and go “I’m bored, let’s google everything that ever happened at Columbine in horrific detail and then compare/contrast with Santa Monica.” Though that is a (morbid, probably trauma disorder induced*) interest of mine, I’m not going to just wheel that in front of others and go “Look at what I found!” (which I have done to people who said “trigger warnings are for snowflakes” – turns out they’re really bothered by content like this. Especially when prefaced with, “Dude, wanna see this weird picture I found? It’s gnarly. It even got a sound clip with it.” I wonder why.) Nah, if others don’t want to see it, it makes sense. All a “Content Warning” is, is exactly that, a warning about the content. It is not a removal of content. Actually, it is a bit ridiculous when I hear people go “Nothing needs content warnings” but get really upset when they hear a spoiler for a movie/book. That will always baffle me. Then again, I like spoilers.

I find “Content Warning” useful because it helps me decide a) Do I want to see/read the media? b) Should I save it for a day when I’m better ready to handle whatever I am going to experience? c) Should I steer clear altogether? And if this helps me, it’s far beyond reasonable doubt it would help others.

*Good time to point out – Most people with mental illnesses don’t go on to become violent members of society or there would be a greater diversity of mass shooters, in opposed to: