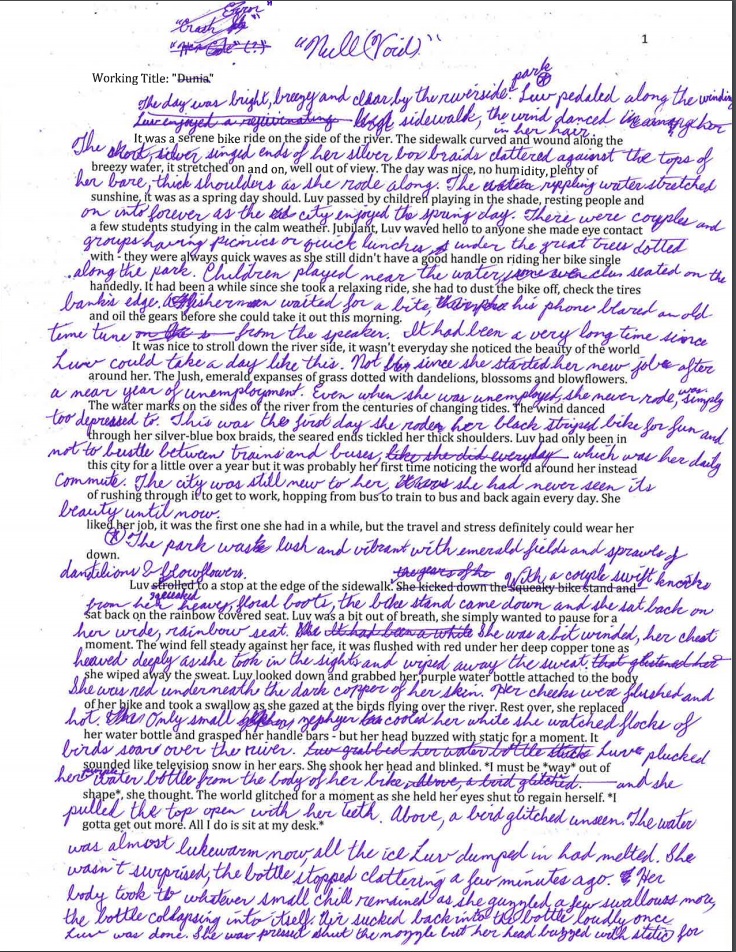 Second year of me puttin’ my works out there. The story that was acquired in year one, “RunOff” was kill fee’d (contract nullified) by Nightlight – but they recently bought “Null(Void)”, which can be listened to here. Yay, narration!

Not much has really changed outside of the fact I have seriously been working more on my edits to make my works better. I have gotten more thorough about printing out my works and going over them with pen. For example, this is what “Null(Void)” looks like in the hand edit stage:

That is a crazy amount of ink. And it’s not the Nightlight edits edition, either. This is the edit I did to tighten up the work (which eventually sold to Nightlight). I have ran through I think three liquid pens already going through my works in this fashion, like, tapped them out from start to finish. But the method works.

I’ve made several short stories this past year (“Null(Void)” being one of them – created in early March, signed a contract for it in May, work finally published in August) but the biggest focus has been editing. I’ve noticed some egregious mistakes in some of my work and others could use additional parts. This has really benefited several of my works.

Going into third year, I’mma need a new laptop because the crappy one I have has practically bitten the dust. Liiiiiiiiiiiiiiiiiiiiiiike, just going on Chrome makes the laptop crash. I feel like I’m back in the Window XP days. There even is an occasional screen glitch in the center. I got the laptop when I was extremely unemployed and broke and needed something to make and send resumes with.This is also the same laptop that crashed and took all of my novel, Butterfly, with it, leaving me with the super rough draft edit and the first, edited chapter. Thankfully, I can afford a new one (*koff*that will have gaming ability*koff*). So there’s that. Now that I have better tech this year around, this makes creation easier. Yes, I still do things long hand (handwriting) but it is nice to not have crashing devices when you’re typing over 50,000 words – especially when they crash because you pressed the “save” button, and corrupt the back up.